Because #ABQ makes the developers build the streets & SIDEWALKS, you get this goofy shit! Google Maps says I could walk there in 55 minutes (via this route)! . If we had sidewalks on San Pedro, I bet it would be half that. Hell, I know I can get to San Pedro and Alameda from my house in 15ish minutes walking. And it would probably take a little less then that to get from Alameda & San Pedro to the development at Holly & San Pedro! . But because the city doesn’t / won’t provide the infrastructure and makes developers do it, you get this goofy shit if you want to walk. Even on a main thoroughfare like Alameda, none of the sidewalks connect between San Pedro and Louisiana. And San Pedro is still a 2 lane road without sidewalks (although there’s a rumor that will be fixed sooner then later. I know that stretch went to design not too long ago, now if they have the money to do the actual construction is a whole other question). . Hell though, Jefferson between Alameda and Paseo Del Norte is 4 lanes and has been completed forever, still doesn’t have sidewalks on either side of the street in 1 key area cus those lots have NEVER been developed! . I’ve begged the city to do something (it’s not ADA compliant), but they refused. @MayorKeller @OneABQ We have to be able to do something to connect these areas. When the cities ADA / DMD boards turn you down, what hope is there to improve the walkability in the Alameda & I-25 area? 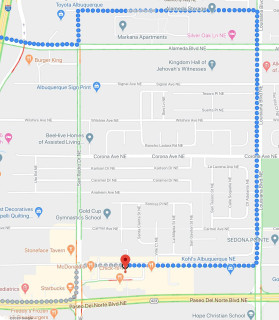